There were 72 mega-deals (CAD $50M+) in 2021 accounting for 72% of the total invested in the year. This is the highest number of mega-deals on record. The notable deals in 2021 included Ontario-based Wealthsimple’s CAD $750M round, BC-based Trulioo’s CAD $476M investment and Ontario-based Applyboard with CAD $375M.

There were 73 VC-backed exits valued at CAD $9.4B in 2021 and setting a record for the most IPOs at 8 (valued at CAD $3.9B). The largest exit in Q4 was Québec-based Coveo Solution’s CAD $1.1B IPO on the TSX (TSE: CVO), backed by CVCA members Fonds de solidarité FTQ, OMERS Private Equity Inc., and Investissement Québec.

“2021 was another record year for VC investment driven by larger cheques into maturing Canadian companies,” said Kim Furlong, Chief Executive Officer, CVCA. ​“Our seed-stage companies saw a substantial increase in deal volume. This is a strong signal that the pipeline of next growth companies is being seeded.”

While the momentum is energizing, ​“It’s important to note that Canada’s VC market is still emerging and is 4.5 times smaller than the US. There’s still significant room for growth,” Furlong added.

The Information, Communications & Technology (ICT) sector continued to lead in 2021, receiving 65% of total VC dollars invested (CAD $9.5B over 431 deals) and doubling the previous record set in 2019 (CAD $4.0B). Life Sciences companies continue to see increasing investment and set a record in 2021 with CAD $1.8B invested across 102 deals, a 50% increase from the previous record set in 2020 at CAD $1.2B invested. 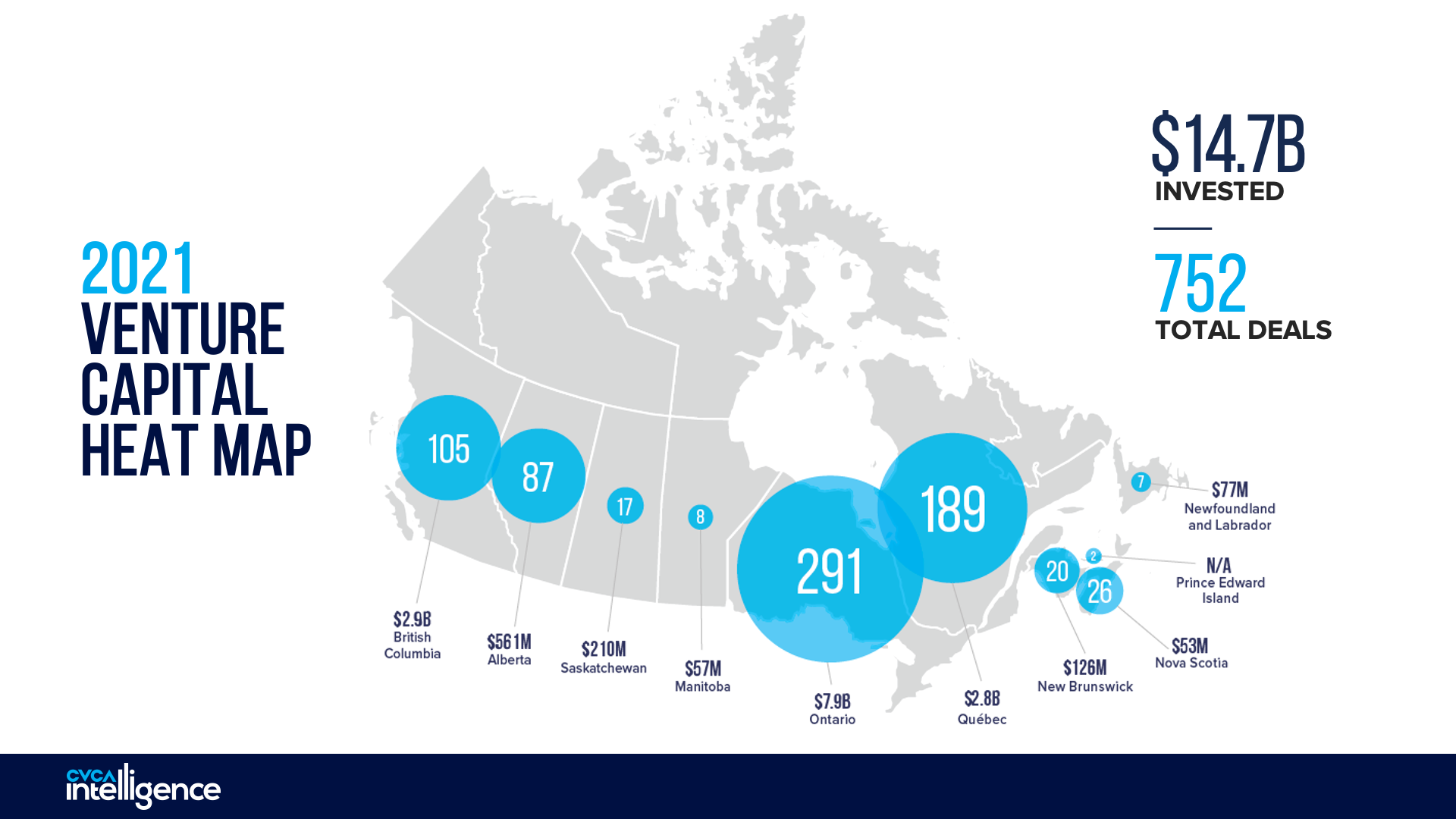 2021 saw the highest PE deal count on record, 21% higher than the previous record in 2019 (661 deals). 84% of all deals with disclosed values were under CAD $25M highlighting the direct connection between Canadian PE investment and Small and Medium-Sized Enterprises (SMEs). SMEs are the backbone of the Canadian economy and according to Statistics Canada, supports over 85% of all new jobs across the country.

“While the amount invested in 2021 returned to pre-pandemic levels, that amount was allocated to a record number of deals,” said Kim Furlong, Chief Executive Officer, CVCA. ​“Focusing on the mid-market segment with three-quarters of PE investment going to SMEs, this deal activity can in part be attributed to the transition of baby boomers towards retirement. Almost 60% of Canadian SME owners are at, or heading towards retirement. In a 2019 study conducted by CVCA and BDC, 49% of SME owners had planned to exit their businesses over the following five years and a significant portion intended to sell to non-family members. While ownership of Canada’s SMEs transitions across generations, private equity also plays a role in succession planning and enabling the growth of our companies.”

2021 saw the highest number of exits on record with 88 exits totaling CAD $6.4B, making it the second-lowest total exit value based on our records. This includes the highest number of IPOs on record with the second-lowest amount raised on record (CAD $1.9B across 6 IPOs). The same trend was also seen across secondary buyout deals (CAD $2B across 18 buyouts), demonstrating a 200% increase in the number of secondary buyouts with almost 24% less value in dollars raised compared to 2020. The trend can be attributed to the rise of continuation vehicles that allow PE investors to stay the course longer and grow their portfolios. 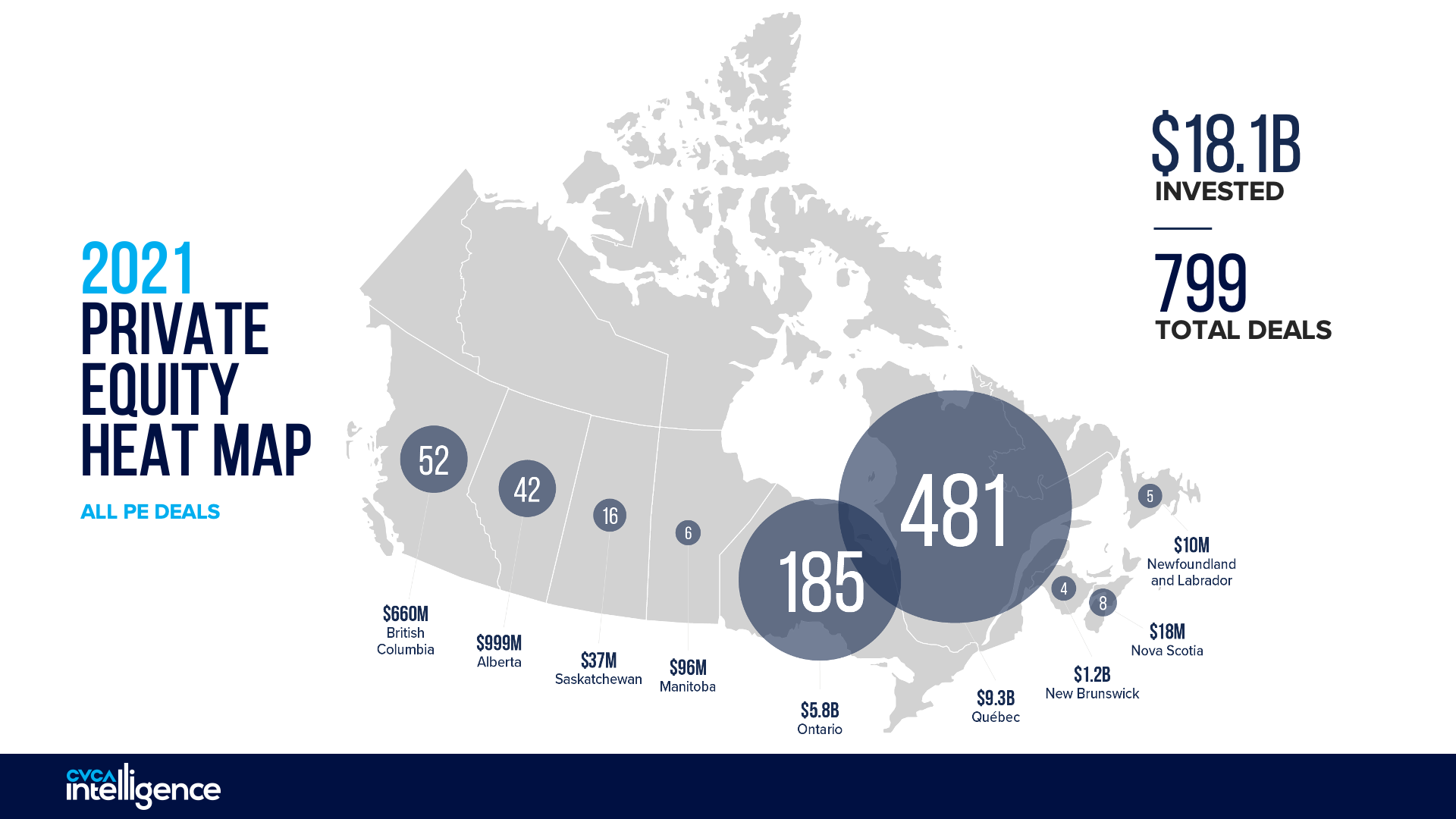 Files in this Report

Get updates in your inbox

For questions or to arrange an interview or quote from the CVCA or if you would like connections to our membership, contact us: